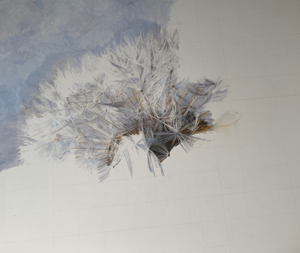 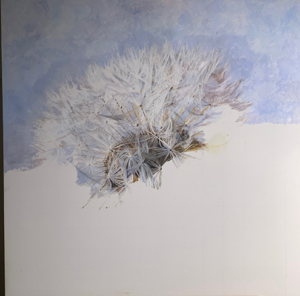 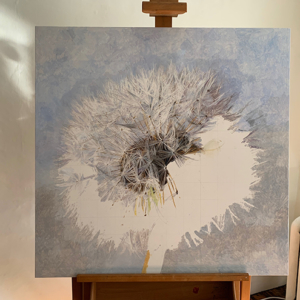 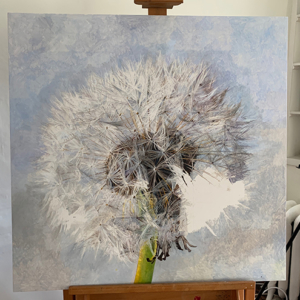 GETTING OUTSIDE THE COMFORT ZONE

After a long period of painting large watercolour flowers I wanted to try something a bit different.   For a while I have been interested in trying oil on gessoed panel so I ordered several cut sizes of thick top grade birch ply which I then asked my framer to prepare for me using traditional gesso. This I believe is far nicer to paint on than the ready made acrylic gesso.   The finished piece was perfect. It had a smooth silky surface and was of a really lovely soft white colour – I felt it was almost too beautiful to spoil with my first efforts and it took a while to pluck up the courage to make a start.  I have never been very good at doing lots of trials before beginning something new as for me the enthusiasm wears off rather quickly, so I prefer to experiment on something I am interested in doing even if the result is not as I had hoped.   Possibly an expensive way to learn, but that’s how it is.

I decided on a dandelion clock. I have done many of these in different media and it is an image I love.  I still have a dandelion clock from last year – they keep very well as long as they are not disturbed. The stalk had withered but I had secured it with a piece of wire and placed it in a square of oasis.   I also have quite a few photographs of dandelion clocks, although most of them are with a black background.   I mapped it out in pencil putting in the main elements and the rough outline and had the image on the computer screen.

Oil paints are not familiar to me and I did find the handling of them quite difficult.  I think I treated it a bit like the watercolour.   I used some turpentine to thin the paint initially and some cold-pressed linseed oil and then someone told me of Liquin.   You can get Liquin for fine detail so I ordered some of that.   I did abide by the rule of fat over lean but one thing I wasn’t sure about is how long to leave something before painting over it.

I began more or less in the top left side of the clock, and worked towards the middle of that portion. I then thought it might be a good idea to put in some background colour.  I had thought of having it on white but changed my mind to the pale grey/blue colour.   It could always be altered later.   It was terribly slow and there were lots of times I thought of abandoning it.   Sometimes I looked at it and thought it was absolutely terrible and then others when I looked at it from a distance and liked it a bit better.   It was very easy to get lost and at one point I realised I had gone completely wrong, made one side of the centre much too wide.   You can paint over oil though, so that is a bit of an advantage.  I added some pencil lines to some of the fine hairs, as I liked the colour of the graphite.   Also, some of the lighter hairs I scratched through with a scalpel.

Half way through I got very fed up with it and decided it was taking me far too long.   I asked my neighbour to come in and have a look and give me an honest opinion and she thought that I needed to finish it.   I don’t really like giving up on things and I had invested a lot of time on it so I carried on and I am quite pleased that I did now because at least I finished it and have learned something from it.  Not sure what yet but there must be something.  The background colour might need re painting, I shall leave it to dry for now and put the whole thing away for a while.   I am not sure whether I want to do another one,  it certainly won’t be anything as fiddly as the clock. I shall wait and see.

By clicking ‘subscribe’ you agree to your data being held for the purpose of sending you our newsletter email. Please see our Privacy Policy for further information.