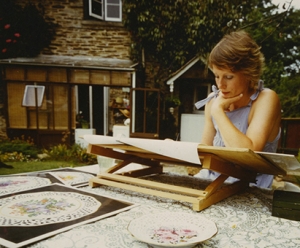 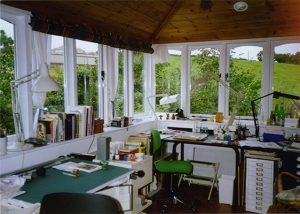 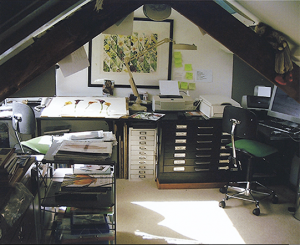 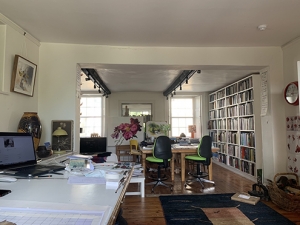 WHAT MAKES A GOOD STUDIO?

What makes a good studio? It is different things to different people but for me the essential thing is that it is a space, large or small, that is entirely mine. I need to be able to leave work and be able to come back to it undisturbed, so whether it is the corner of a room or an entire room, it has to be mine.

I began my artistic life with a table in the tiny hall of our small London flat. We had the top floor of a large house in Hampstead and the tiny hall was the only available space. When we bought a cottage in Devon, and eventually moved there, my studio was a small rather decrepit wooden conservatory attached to the house. It was freezing cold in winter and boiling hot in summer but I did all the paintings for my apple book there and worked in it for about ten years. Eventually we had a room built on the other side of the house. This was wonderful. It had windows all round which looked on to the garden, a wooden floor, and it was warm. I worked in there for another ten years very happily.

I then moved house and lived on Dartmoor. I was allotted a small north facing room looking out on to a stone wall. The less said about that the better. I had a builder convert some of the attic into a studio accessed by a ladder. It was very light and a lovely space but you could only stand in the middle. After a while I decided to rent a purpose built studio at Dartington. That was a fantastic space, large, with good light and plain walls. I really enjoyed working there and having people around and the only limitation I can say is that at around 5 o’clock I wanted to go home and rather missed working into the evening. I had mixed feelings, a room of my own but a little too far away.

After seven years I moved again into the house I now occupy. The whole house, apart from bedrooms, kitchen and dining room, is my studio. I had a very large sitting room which was a bit of a show piece and never used and so after a while I made that my studio and the small room upstairs that I had been using became a small sitting room. I also have a large print room with two etching presses off which there is a small room for etching. Upstairs I have a large room where I keep my paintings. I have made a slope on two walls so I can put paintings there and look at them, which is very useful when preparing for an exhibition. It helps to be able to see all the work together. I think it is good to have paintings tucked away in another room and not visible all the time because they can become too familiar and then it is hard to see them in a dispassionate way.

I like working at home as I can work during the evening, night-time, day-time, any time I like. In the winter the fire is lit and I enjoy working quite late into the night. I know I am fortunate but it hasn’t always been so and looking back now I might find it hard to return to the tiny hall space, but one thing that has been consistent is that whatever the space, it has been mine.

By clicking ‘subscribe’ you agree to your data being held for the purpose of sending you our newsletter email. Please see our Privacy Policy for further information.